Shibata-ryu Aikite Rope Torite:
Is a very effective flexible weapon. This can be used to strike, choke, trap and throw the enemy. Since it is small it can be easily concealed. It is a (USA) legal version the Kusari-fundo (鎖分銅). Which is a handheld weapon that was used in feudal Japan. It consists of a length of chain (kusari) with a weight (fundo) attached to each end of the chain. Various sizes and shapes of chain and weight were used as there was no set rule on the construction of these weapons. Other popular names are manrikigusari (萬力鏈) (“ten thousand power chain”) or just manriki. The use of the kusari-fundo was taught in several different schools, or ryū (流), as a hidden or concealed weapon and also as a self-defense weapon. The kusari-fundo was useful when carrying a sword was not allowed or impractical, and samurai police of the Edo period would often use a kusari-fundo as one of their non lethal arresting weapons. There are several chain and weight weapons. One type known as a konpi is mentioned in manuscripts as far back as the Nanbokucho period (1336-1392).
Masaki Tarodayu Dannoshin Toshiyoshi (1689-1776), founder of the Masaki ryū, is said to have developed a version of the kusari-fundo[1] while serving Lord Toda, as a bloodless weapon that could be used to defend the grounds of Edo castle. He developed techniques on how to use this weapon. He even founded a school that teaches how to use this weapon. Students were taught to use this weapon to entangle the opponent’s weapon or limb. After this, a lock or choke is applied using the other end of the chain. In the right hands with the right amount of training can transform this weapon into a devastating tool. Later on, constables used this tool to capture criminals. 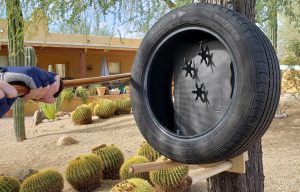 Martial Arts Trainer is a flexible  training device that can be modified for your practice. This is easy to travel with and use any where there is a strong door or tree. The arms / Tonbo can be removed use 1 or 2 or all 3 at one time. The arms can also be used as a self-defense stick – This is very heavy duty design and almost indestructible.

Theme by Anders Noren — Up ↑